All Florida Department of Health locations in Volusia County are closed Wednesday through Friday, Sept. 28-30

Avian flu, a highly contagious viral infection that occurs naturally in birds, continues to be detected in Volusia County. Technically known as highly pathogenic avian influenza (HPAI), the disease was documented in Volusia County in February when three sick water birds were brought to the Marine Science Center and park rangers at Hontoon Island State Park noticed that black vultures were dying at higher-than-normal rates.

Since then the Florida Fish and Wildlife Conservation Commission (FWC) has confirmed cases in 24 Florida counties. Officials have been coordinating closely with other state and federal agencies to monitor, investigate and document ongoing cases in Florida.

Wild birds can carry the virus but may not always show signs of illness. They can bring the disease to new areas when migrating, potentially exposing domestic poultry. Vultures are of particular concern because they can pick up the virus while feeding on carcasses. Domesticated birds such as chickens, ducks and turkeys are also at risk because they seem to have less ability to fight off the disease.

There is a low risk of transmission to humans, but in late April the CDC confirmed the first human case in the United States. A Colorado man who had direct exposure to poultry and the culling of birds with presumptive bird flu was sickened but has recovered after experiencing fatigue.

To prevent the spread of avian flu, the FWC advises the public to avoid handling sick or dead wild birds, keep wild birds away from domestic birds, and report wild bird mortalities at https://app.myfwc.com/FWRI/AvianMortality/. Although the Marine Science Center’s bird hospital is closed to admissions, residents who find injured or orphaned birds can call staff at 386-304-5530 for advice.

According to Tracy Dawson, manager of the Marine Science Center’s bird hospital, most of the current Volusia County cases are in black vultures. Other species affected in Florida include bald eagles, great horned owls, and mallard and Muscovy ducks.

Dawson reports that the center’s 18 permanent avian ambassadors remain healthy. To keep the animals safe, the bird hospital remains closed to bird admissions. The bird exhibits, however, are open to public viewing.

This is the largest outbreak of avian flu to affect the United States. According to the U.S. Department of Agriculture (USDA), avian flu has been detected in 34 states. With 197 cases, North Dakota has the highest total, followed by North Carolina with 143 and Florida with 74. The number of Florida cases is expected to increase as northern birds migrate south this fall.

The USDA website reports: “The outbreak in Florida is believed to have followed the introduction of the virus last year from Europe into Canada. The virus then traveled with migratory waterfowl down the Atlantic Flyway to Florida and other states. The current outbreak of HPAI in wild birds in Florida is unprecedented.” 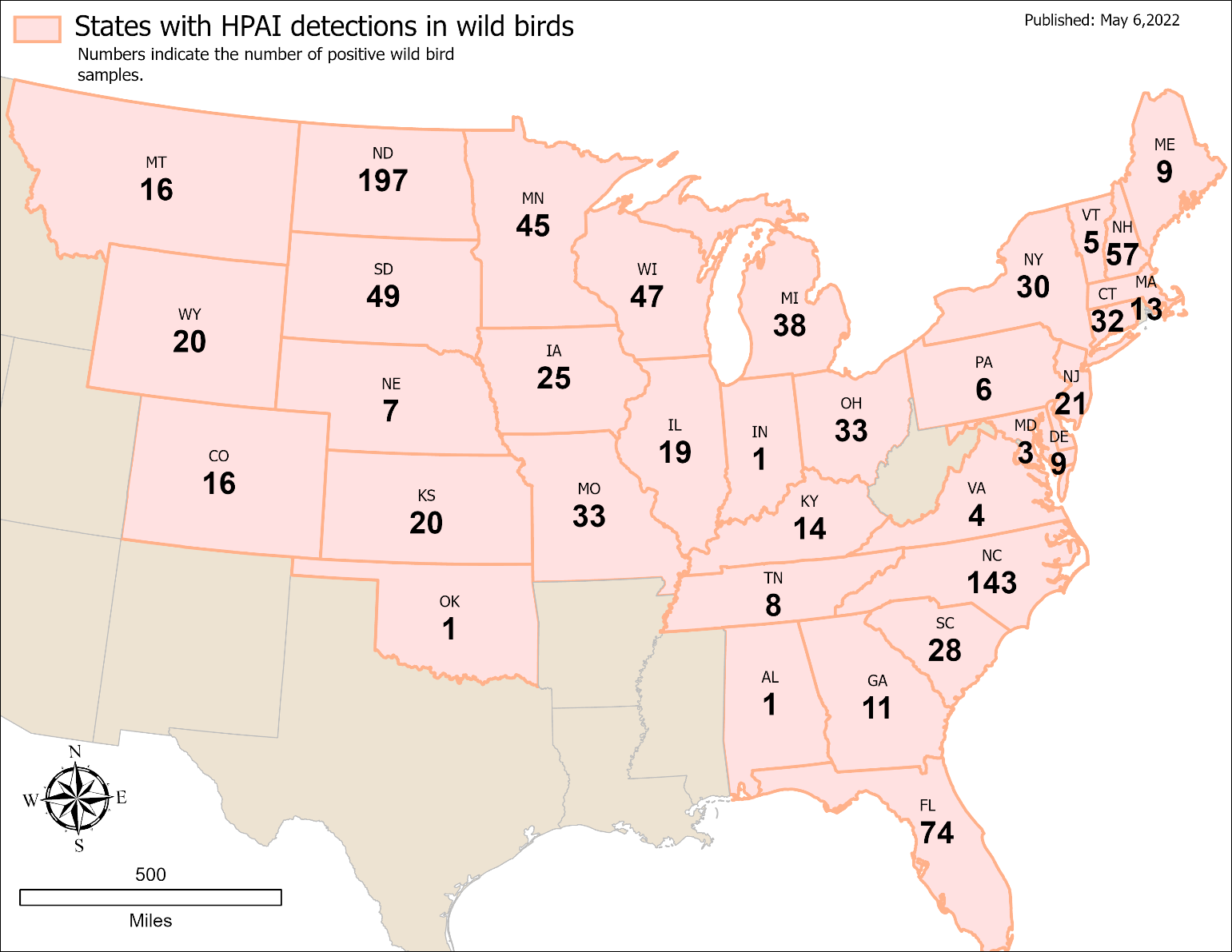